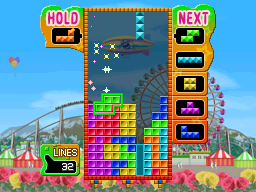 Watch Download (.dsm)
Author notes Discuss
6.03 / 10 Votes: 4
Tetris Party Deluxe released 25 years after the original incarnation of the popular puzzle game, on both the Nintendo DS and Wii. It features many new modes, including online multiplayer with up to 3 other players on the DS version.
This run by Taechuk completes the Sprint mode, commonly referred to as "40 lines". Focusing on the In-Game Time, it achieves a record-breaking 23"16.
Published on 3/31/2019
See full publication history
Game:
Tetris Party Deluxe
Genres:
Puzzle

Emulator Version:
DeSmuME 0.9.9
Webmasters, please don't link directly to the files. Link to this page or the front page instead.
Republication of movies from this site is only allowed under the following conditions:
Do not label them with speculations. If unsure, ask the site staff for details.