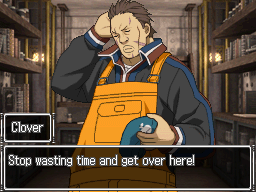 Watch on YouTube
Author notes Discuss
7 / 10
Nine Hours, Nine Persons, Nine Doors is a visual novel for the Nintendo DS developed by Chunsoft and published by Aksys Games in North America in 2010. It features Junpei, who finds himself trapped aboard a sinking ship, and, along with 8 other people, needs to find a door with a 9 on it.
yep2yel solves the many puzzles of the various escape rooms and gets all endings in record time.
We very strongly recommend that you play the game first before watching the TAS, as it'll inevitably spoil the story and the solutions.
Published 16 days ago
See full publication history
Game:
Nine Hours, Nine Persons, Nine Doors
Genres:
Adventure
Puzzle
Storybook

Emulator Replay:
BizHawk 2.7
Download (.bk2)
Webmasters, please don't link directly to the files. Link to this page or the front page instead.
Republication of movies from this site is only allowed under the following conditions:
Do not label them with speculations. If unsure, ask the site staff for details.