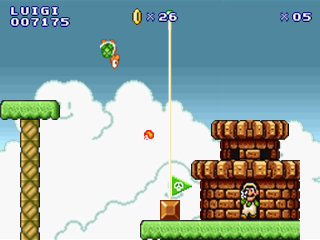 Watch on YouTube
Author notes Discuss
6.9 / 10
Super Mario Flash is a Flash game that appears to be based off of Super Mario All-Stars, using the map feature from Super Mario Bros. 3 and the level designs from Super Mario Bros. and Super Mario World. While it may not play exactly like the games it's based off of, the game served as a passable substitute for those in the mid-2000s who had Internet but didn't have the resources to play the original games.
In this run, Vexxter, TheAmazingAladdin, and RileyTech improve on their previous movie with better re-routing which also contains intentional slowdowns and newer glitches to complete the game as fast as possible.
Published on 8/11/2022 2:00 PM
Obsoletes:
Flash Super Mario Flash by Vexxter, TheAmazingAladdin & RileyTech in 04:43.04

Emulator Replay:
libTAS v1.4.3 + Ruffle nightly 2022-07-06
Download (.ltm)
Webmasters, please don't link directly to the files. Link to this page or the front page instead.
Republication of movies from this site is only allowed under the following conditions:
Do not label them with speculations. If unsure, ask the site staff for details.