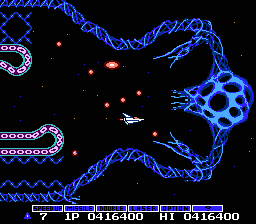 Watch Download (.fcm)
Author notes Discuss
8.39 / 10 Votes: 90
In this run, adelikat picks up maximum speed upgrades and has fun with perfect reflexes, much like the previous movie. That is certainly something nice to do, because the game scrolls automatically and the player cannot affect the speed. However, the point of this movie is not just to beat this game as fast as possible, but rather to do all kinds of unpredictable and awe-inspiring things rarely seen in any TAS — without losing time. See for yourself.
This is probably one of the best illustrations on how to create art out of a simplistic and otherwise uninteresting game to watch.
What is also different about this movie is an extra warp which significantly shortens the game, and the use of a new tool (input macro) as described in the submission text. Bots are occasionally used to generate pseudorandom input while still avoiding death.
Also be sure to check out this movie being played back on an actual NES.
Published on 11/2/2006
Obsoletes:
NES Gradius by Morimoto in 14:12.00

Emulator Version:
FCEU .16
Webmasters, please don't link directly to the files. Link to this page or the front page instead.
Republication of movies from this site is only allowed under the following conditions:
Do not label them with speculations. If unsure, ask the site staff for details.