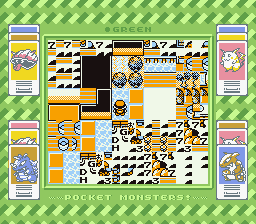 Watch on YouTube
Author notes Discuss
6.59 / 10
This game (along with Pocket Monsters: Red) is the Japanese version of the first generation of Pokémon games and the first ever Pokémon game.
This run, a ten frame improvement over the previous version, abuses a glitch that was fixed in later releases of Pocket Monsters (Pokémon) that allows a player to warp freely through the world. Victory is achieved in a matter of minutes with this route. Normally, the game takes well over an hour at the fastest to finish.
To see a more substantial run of the first generation of Pokémon, watch this movie. For a less substantial run (which also demonstrates that they didn't fix all the glitches in later versions), watch this one.
Note: This movie requires VBA rerecording v20, as it does not sync on any other version.
Published on 10/10/2010 12:00 AM
Obsoletes:
SGB Pocket Monsters: Green "warp glitch" by primorial#soup in 04:24.53