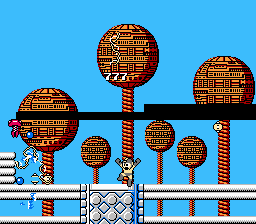 On this site, we make perfect movies, and then we surpass them. Of course, if we can surpass them, they were not perfect in the first place, but who would have known?
When "perfection" is defined as "as fast as possible", it requires some sacrifices. Indeed, this movie sacrifices a lot in the playability of the game. Full of tricks to pass through walls, tricks to avoid mandatory battles, tricks to pass through enemies relatively unharmed, tricks to acquire weapon refills in little time — there is very little in this movie left that resembles normal playing. Even death is used as a viable playing strategy that saves time. All of the tricks are still performed by the means of mere controller input, even though significant portions of the input were calculated by a computer program.
This movie is a considerable improvement of 03:04.40 to the previous movie; this is mainly due to a new technique which tricks the game into calling an 'end of level' object.
Of course, upon watching this movie, one does have to question something... is it Mega Man saving the world? Or Dr. Wily trying to save it from absolute destruction?
Published on 12/1/2010 12:00 AM
Obsoletes:
NES Mega Man by Deign in 15:29.27

Emulator Version:
FCEUX 2.1.2
Webmasters, please don't link directly to the files. Link to this page or the front page instead.
Republication of movies from this site is only allowed under the following conditions:
Do not label them with speculations. If unsure, ask the site staff for details.