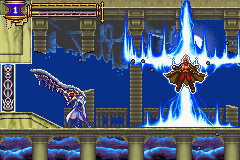 Watch Download (.vbm)
Author notes Discuss
9.16 / 10 Votes: 31.5
Everyone who has at least once attempted to gather a soul from each of the 120 different enemies in Aria of Sorrow, especially during a speedrun, knows the frustration it incurs after a hundredth failed attempt to get the required drop. That just makes this all-souls TAS, played on hard mode and without using glitch warps in a little less than 25 minutes, even more impressive.
Upon completing his warpless run, Kriole decided to take another jab at this category, improving upon his earlier effort by 51 seconds.
However, if you would like to see the game beaten to a pulp in a mere quarter of this time, don't miss the any% run by klmz.
Note: While the player doesn't use glitch warps (neither by death nor by getting out-of-bounds using transform souls), he uses the normal warp rooms present in the castle.
Note: Starting from reset was necessary to use hard mode. However, doing so is normally not allowed — refer to the rules to see the reasons.
Published on 3/13/2011
Obsoletes:
GBA Castlevania: Aria of Sorrow "all souls" by Kriole in 25:47.05

Emulator Version:
VBA
Webmasters, please don't link directly to the files. Link to this page or the front page instead.
Republication of movies from this site is only allowed under the following conditions:
Do not label them with speculations. If unsure, ask the site staff for details.