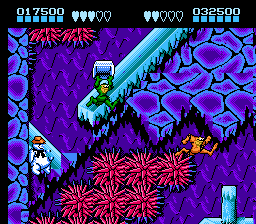 Battletoads (1991) is a futuristic beat 'em up known for its graphics and extreme difficulty. The story is that the sexy Dark Queen who wants to rule the universe has kidnapped Princess Angelica and a toad named Pimple. Two other toads, Rash and Zitz, attempt to rescue them and defeat the Dark Queen.
Maybe you thought Battletoads was a game full of amphibians, but it is actually full of bugs. Those beta testers really should have spent a little more time on this game...
In this run, feos and MESHUGGAH beat the previously fastest TAS of this game by 02:21.93, this time using 2 players instead of 1. You will laugh, you will cry, but most of all, you will wonder how in the world they broke this game so much. Do yourself a favor and read the authors' notes.
To see the game broken even further with the use of memory corruption, watch this run.
Published on 11/16/2011
Obsoletes:
NES Battletoads "warps, 2 players" by nesrocks in 15:29.03
NES Battletoads "warps, 1 player" by Phil, Genisto in 13:27.98