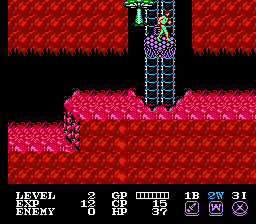 Watch Download (.fm2)
Author notes Discuss
5.85 / 10 Votes: 11
In Cosmo Police: Galivan, the player takes the role of the last remaining member of the Cosmo Police. His comrades died while trying to free the planet Cynep from the evil roaming on it. Now the player is the last hope.
This game is a mix between a shooter and a platformer: the player walks through the caves, jumps over obstacles and shoots everything in sight. Well, at least if he has a weapon: at the beginning he is unarmed and can only kick or punch. He has to find pyramids which were dropped by his dead colleagues (also sometimes from killed aliens), which grant an armor piece, more life energy and a weapon. When the player finds a pyramid, the weapon gets upgraded for a limited amount of time.
However, AmaizumiUni exploits a glitch performed in the "alien world" portion of the first stage, during the transition of the first elevator (read the submission comments as well as this post for more details). Therefore, he reaches a time of just 3 minutes and 20.1 seconds.
Published on 1/25/2015 12:00 AM
See full publication history
Game:
Cosmo Police: Galivan
Genres:
Action
Adventure
Platformer