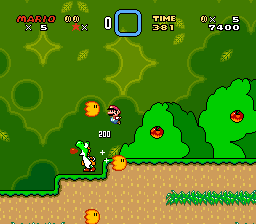 Watch Download (.lsmv)
Author notes Discuss
7.33 / 10 Votes: 24.5
This is the 4th published movie in a category of impressively fast Super Mario World TASes. It beats the game by jumping to the credits from one of the two levels available from the start, Yoshi's Island 2. This happens because a glitch involving eating a Charging Chuck allows manipulating the code being executed by the game using only controller input.
This run is 00:00.17 seconds faster than Masterjun's previous movie. This improvement comes mostly from kicking the green shell forwards by touching it while Yoshi is ascending instead of eating it after spitting out the fireballs, which allows to spit out the fireballs much further before getting the green shell.
For more movies like this, see this list of TASes that execute arbitrary code.
Using a similar glitch, Masterjun has also used mere controller input to embed his own games into Super Mario World itself.
Published on 8/18/2015
Obsoletes:
SNES Super Mario World "game end glitch" by Masterjun in 00:41.98

Emulator Version:
lsnes rr2-β22b1
Webmasters, please don't link directly to the files. Link to this page or the front page instead.
Republication of movies from this site is only allowed under the following conditions:
Do not label them with speculations. If unsure, ask the site staff for details.