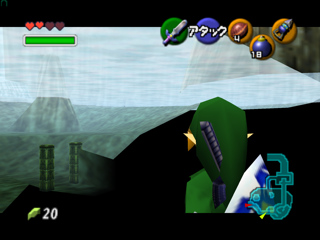 Watch on YouTube
Author notes Discuss
8.88 / 10
In this TAS of The Legend of Zelda: Ocarina of Time, the author aims to beat the game as quickly as possible while completing all dungeons, temples, and Ganon Trials. This goal is commonly referred to as "all temples", "all dungeons", or "MST (Medallions/Stones/Trials)".
This run has roughly 35 minutes of improvements in gameplay over the previous TAS of its kind.
This movie contains several new glitches and sequence breaks which allow for a much faster completion than were possible when the last run was made. Several large glitches in the game are not used in the run, such as those which allow the player to manipulate memory addresses to obtain items without physically picking them up. These are avoided because it would make the completion of any dungeon completely arbitrary; they can be seen in an old any% run.
Unlike the previous movie of this category, this TAS is played on the Japanese version of the game. The reason for this is that the text is significantly faster than in the English version, which means that far less time (roughly 12 minutes) is spent waiting for text boxes and cut scenes to end before getting back to the action. English subtitles were added to the encode for people interested in what was said.
The author's notes explain in great detail many of the things done in this TAS which may be confusing to those who aren't familiar with Ocarina of Time speedrunning. Reading them is strongly advised.
Note: There are encodes of higher resolutions in the discussion thread.
Published on 4/25/2012 12:11 PM
Obsoletes:
N64 The Legend of Zelda: Ocarina of Time "All Dungeons, Temples, & Ganon Trials" by Bloobiebla in 2:51:19.10