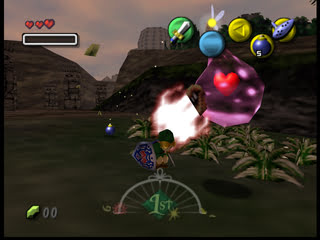 Watch on YouTube
Author notes Discuss
6.75 / 10
Published on 11/20/2022
To beat The Legend of Zelda: Majora's Mask, players must normally visit four temples and rescue the giant at each one, so that they can later be called upon with the Oath to Order to stop the moon from destroying Termina. The authors of this TAS barely even play the game, instead beating it by supersliding to the observatory and then sliding off of a pot using a bomb.
In this heavily glitched run of Majora's Mask, the authors achieve total control of the game using the newly discovered Stale Reference Manipulation (SRM) technique, allowing them to unlock inputs on a third controller and then using it to input and execute code that jumps the game straight to its credits sequence. Setting up the SRM is quite a feat, and it, along with loads of other tricks used in this run, are explained in detail in the authors' submission notes. You can also watch a version with voice commentary by BruceShankle here.
The authors improve the previous movie by 48 frames. This run is performed on the Japanese 1.0 version of the game, which features faster text than the English version, in addition to having the fastest memory setup.
Obsoletes:
N64 The Legend of Zelda: Majora's Mask "game end glitch" by BruceShankle, Fox, andzura & Seedborn in 22:44.90

Emulator Replay:
BizHawk 2.6.1
Download (.bk2)
Webmasters, please don't link directly to the files. Link to this page or the front page instead.
Republication of movies from this site is only allowed under the following conditions:
Do not label them with speculations. If unsure, ask the site staff for details.